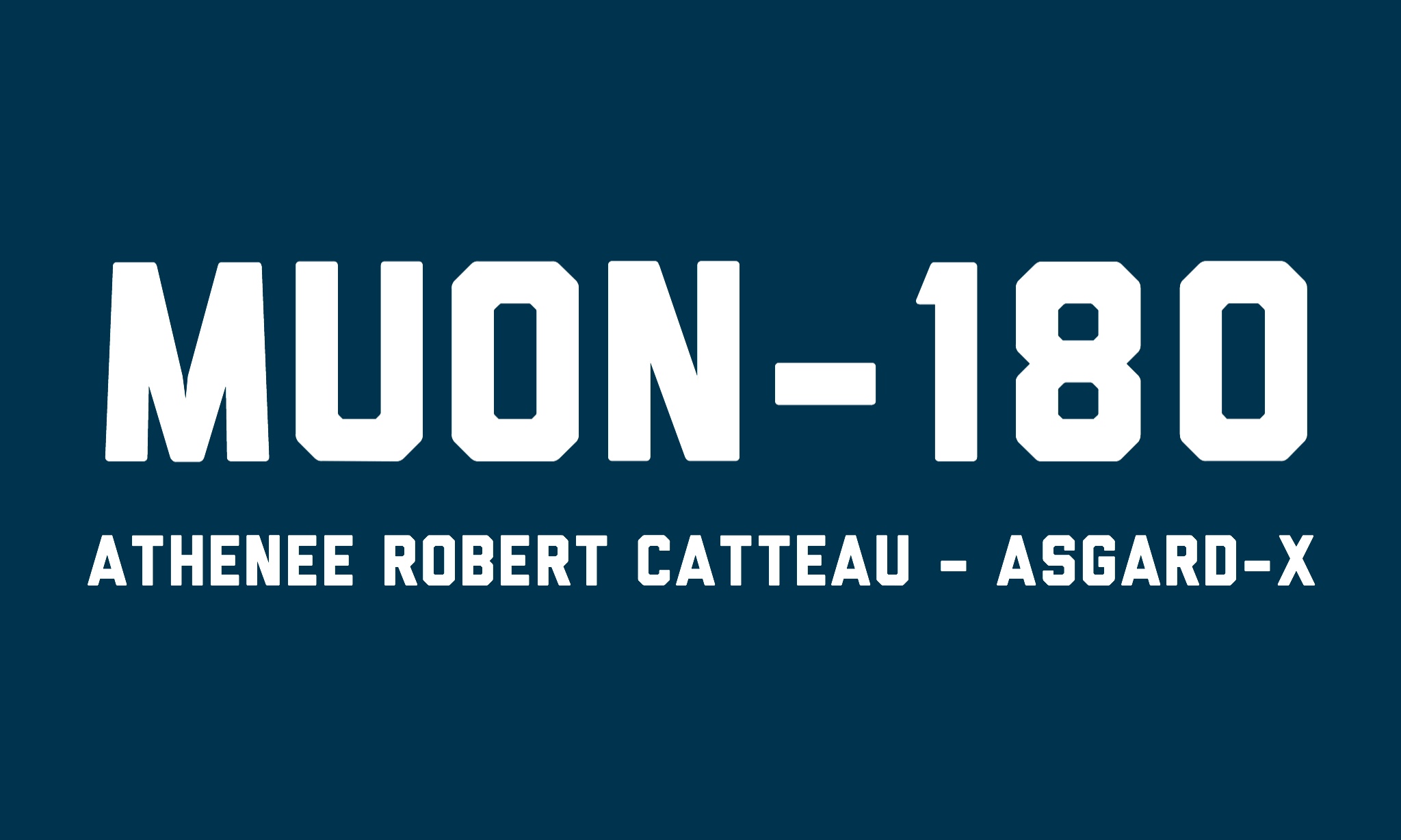 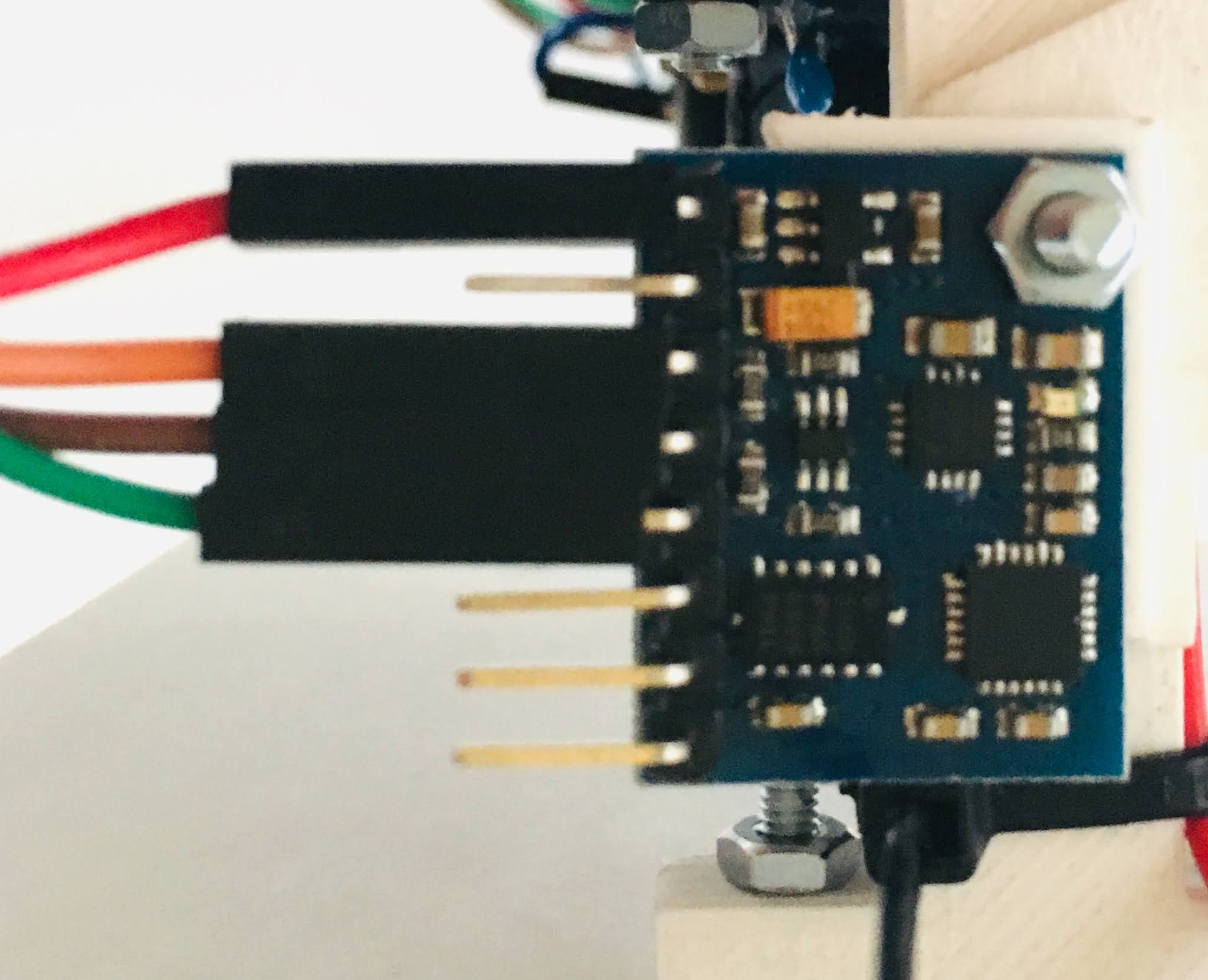 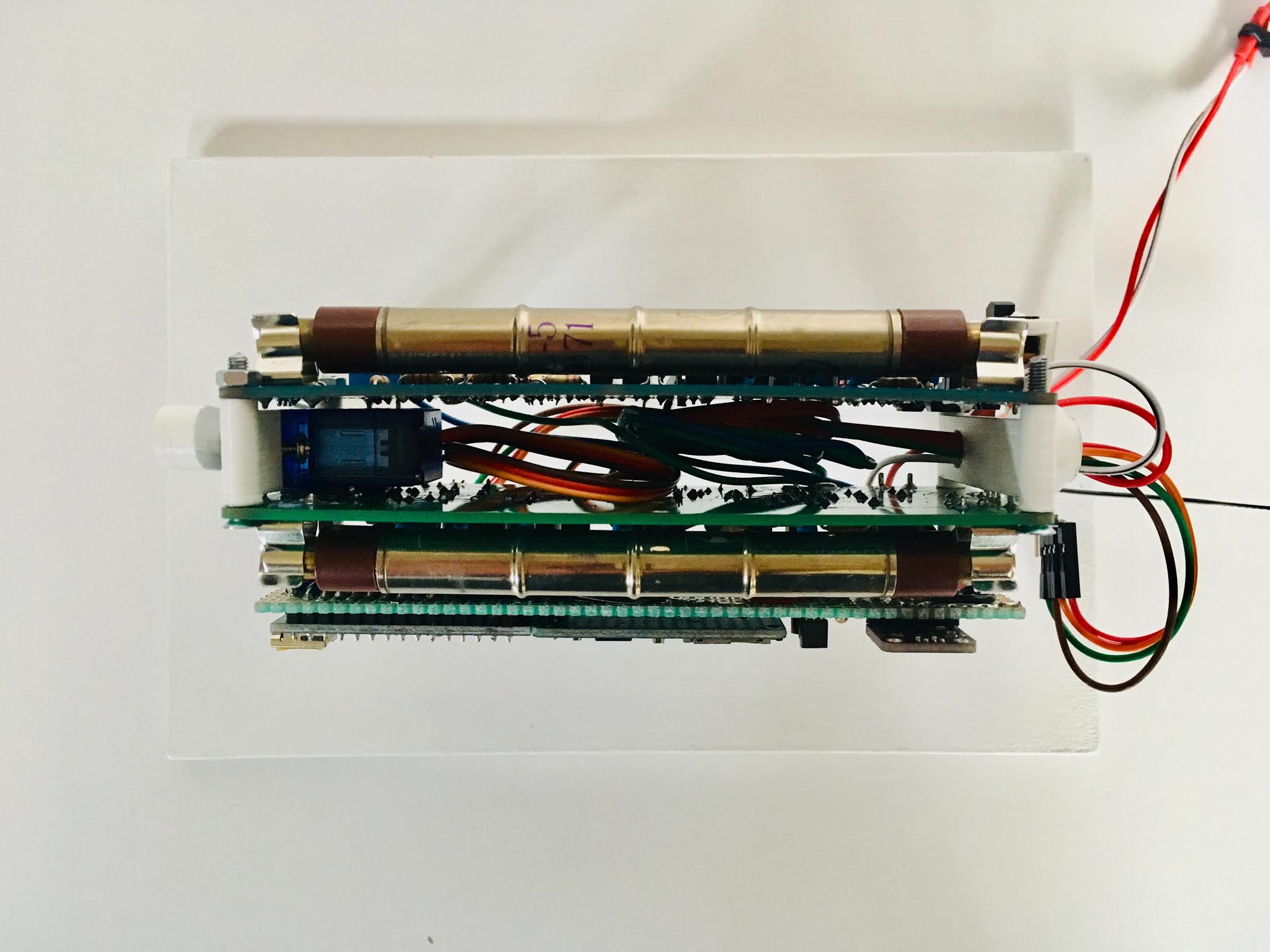 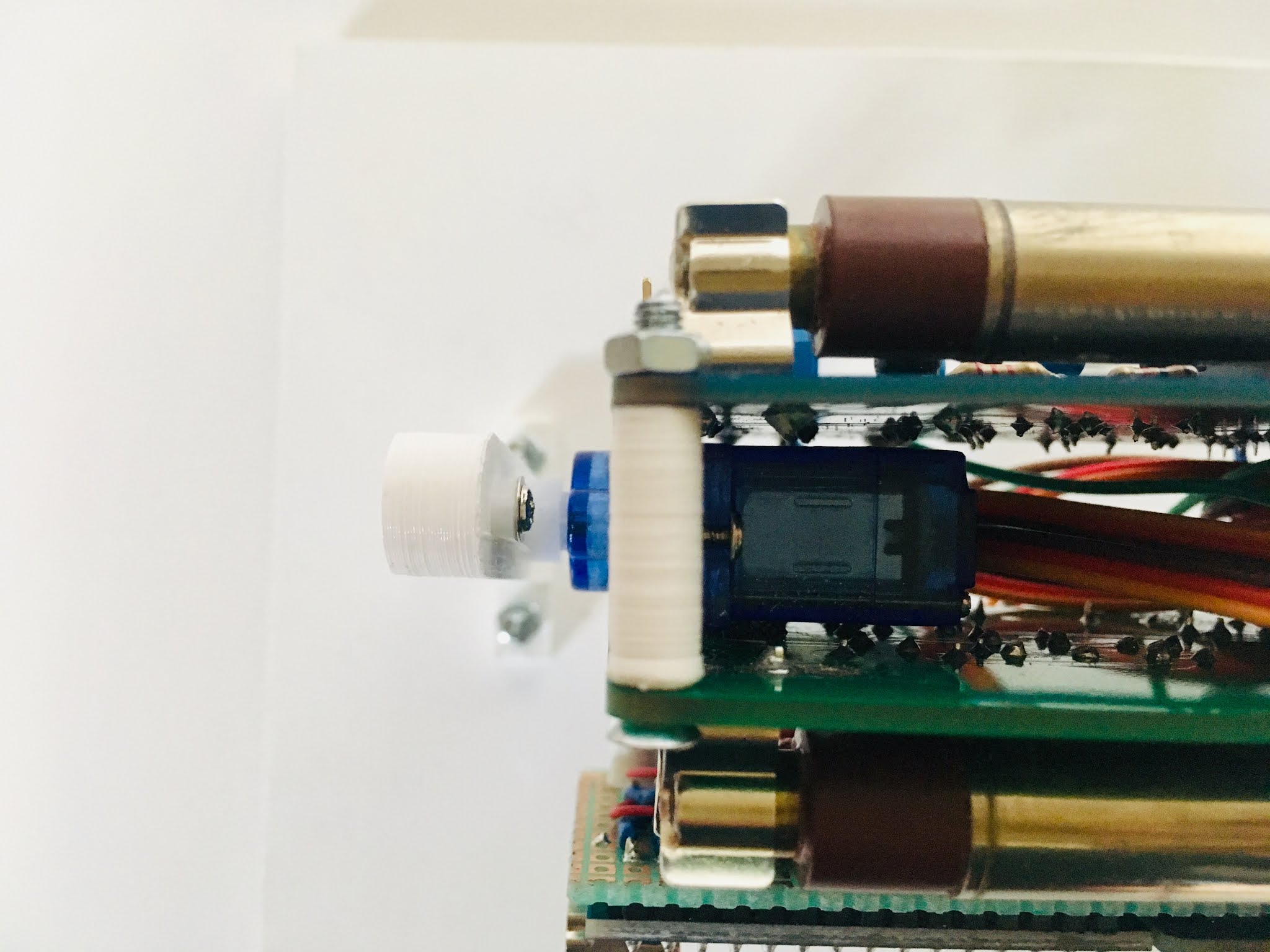 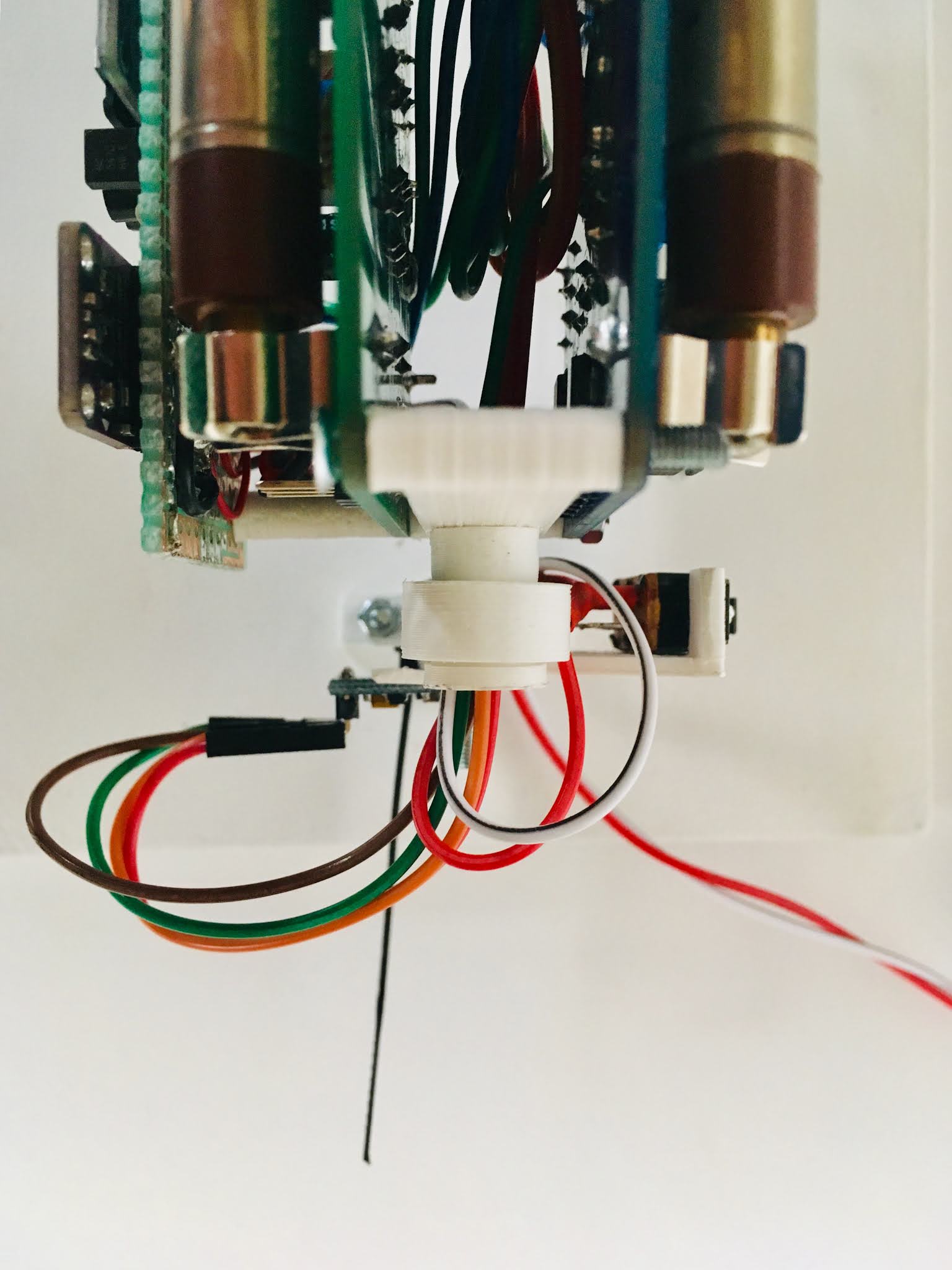 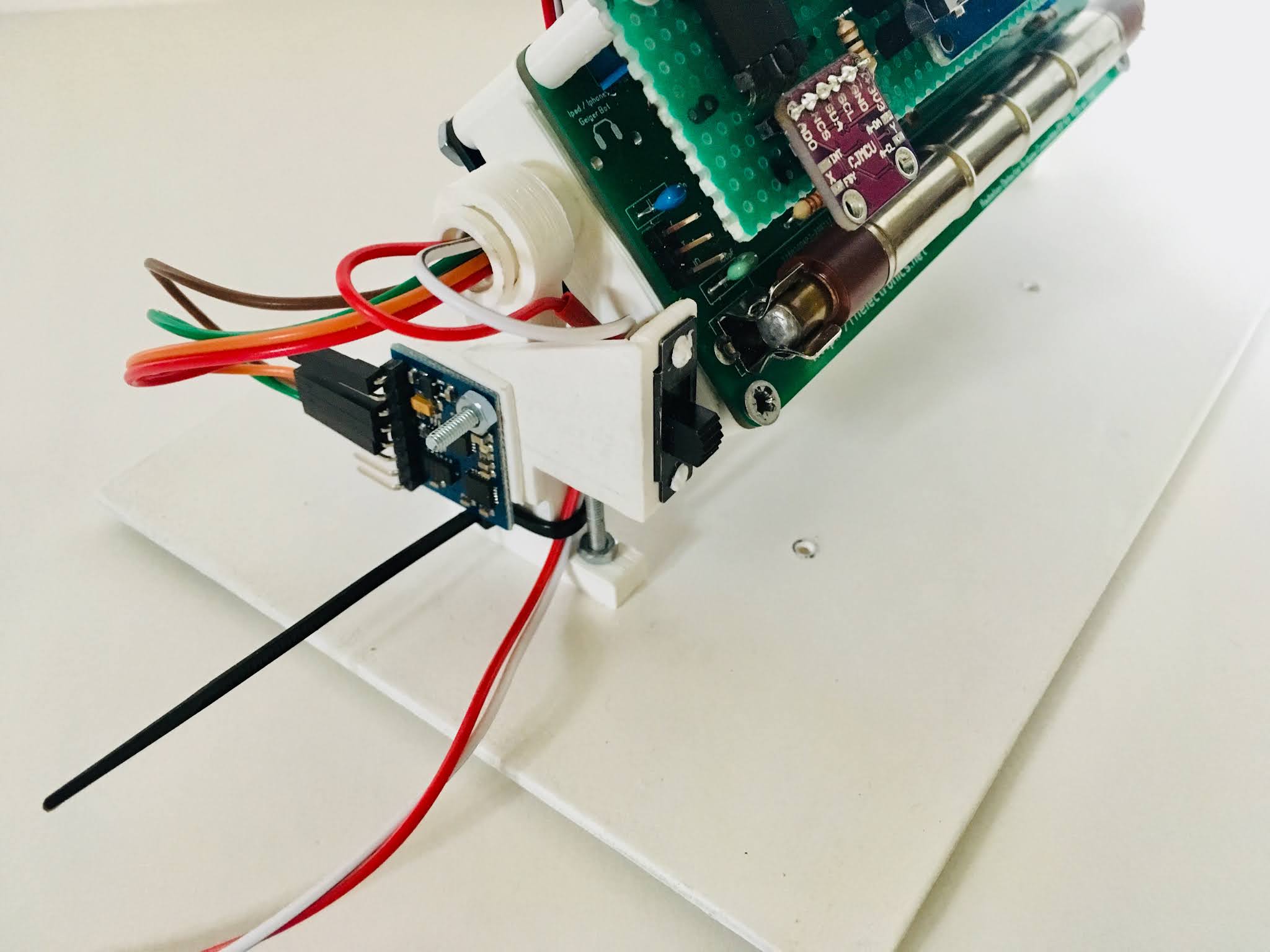 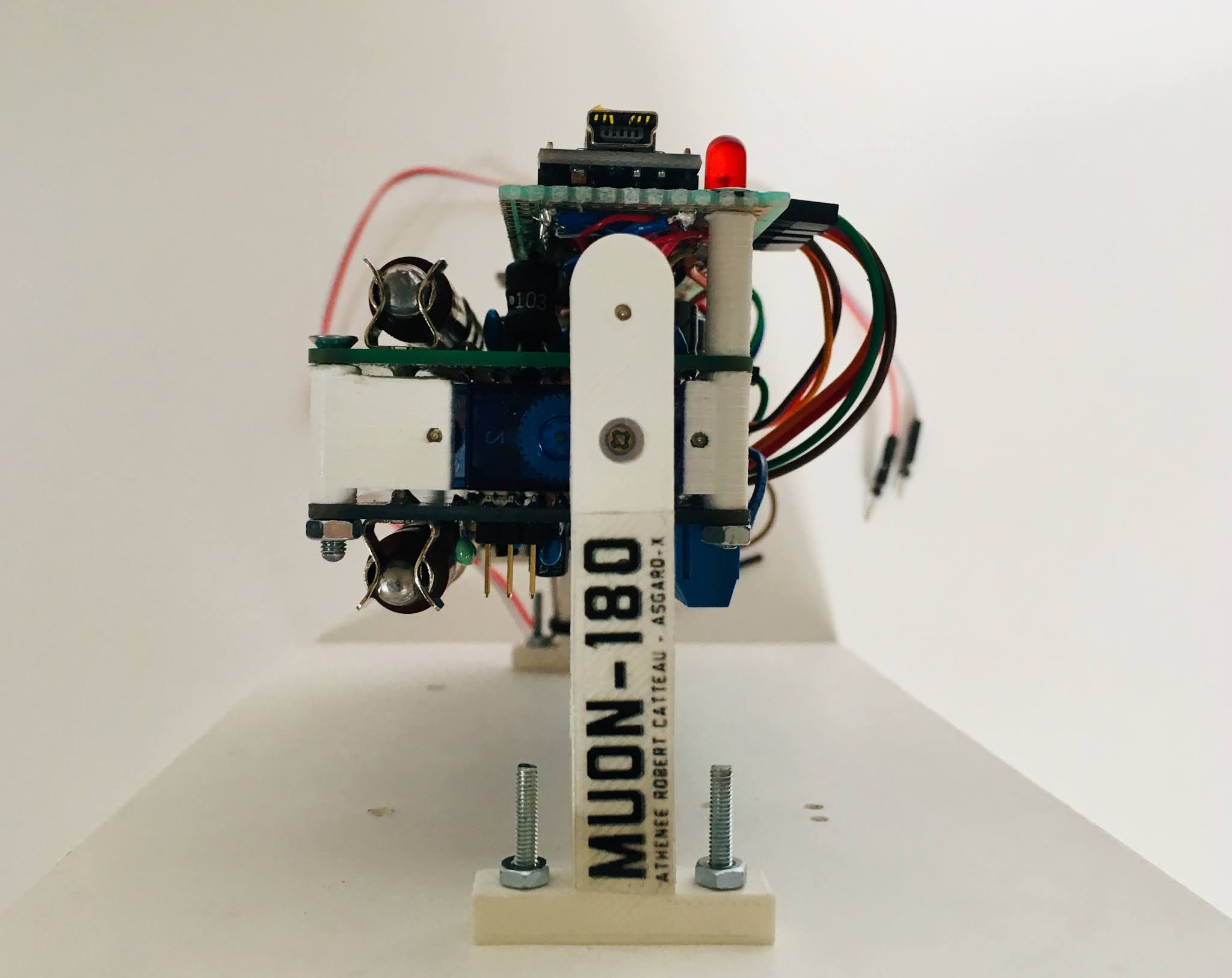 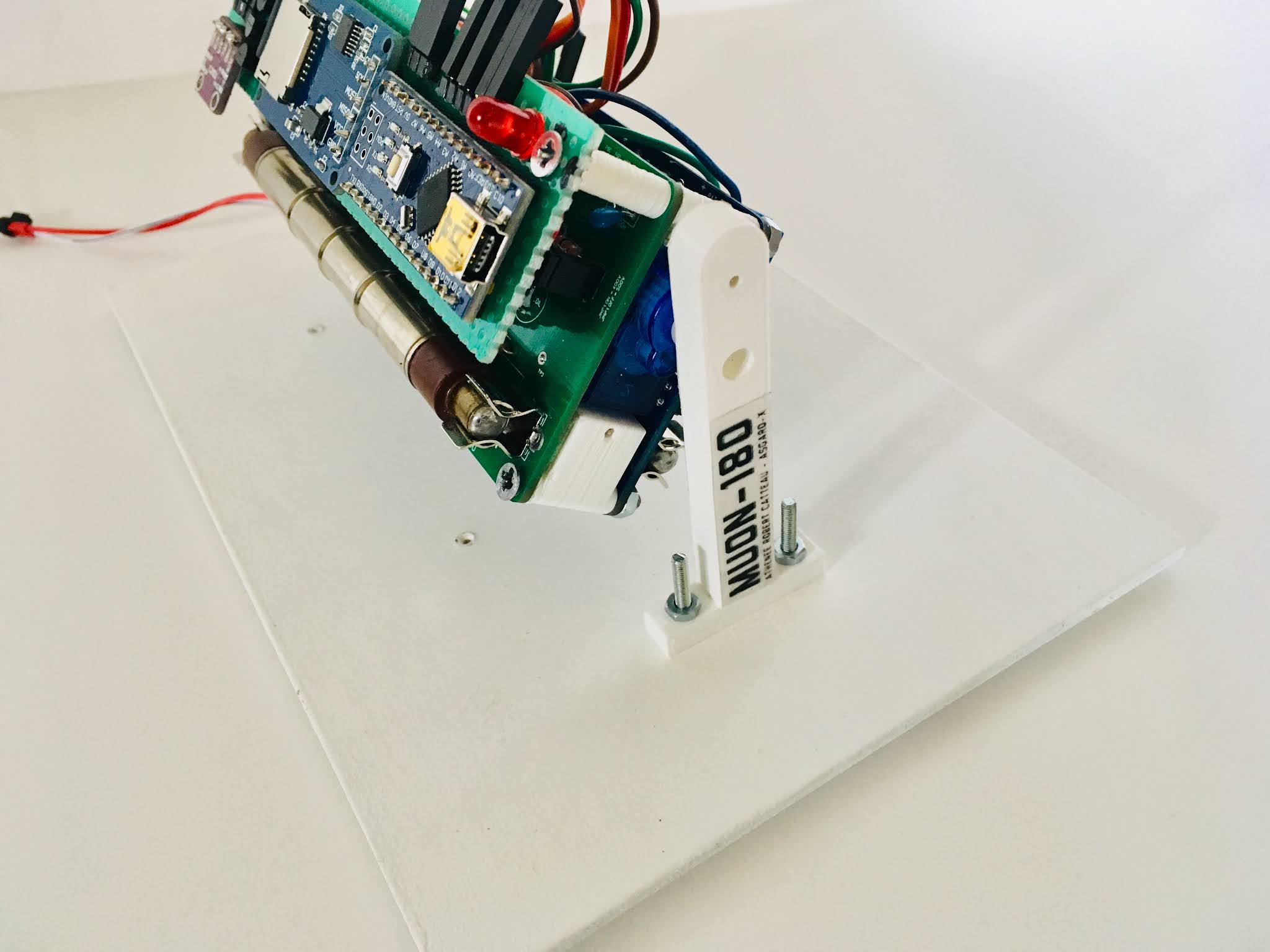 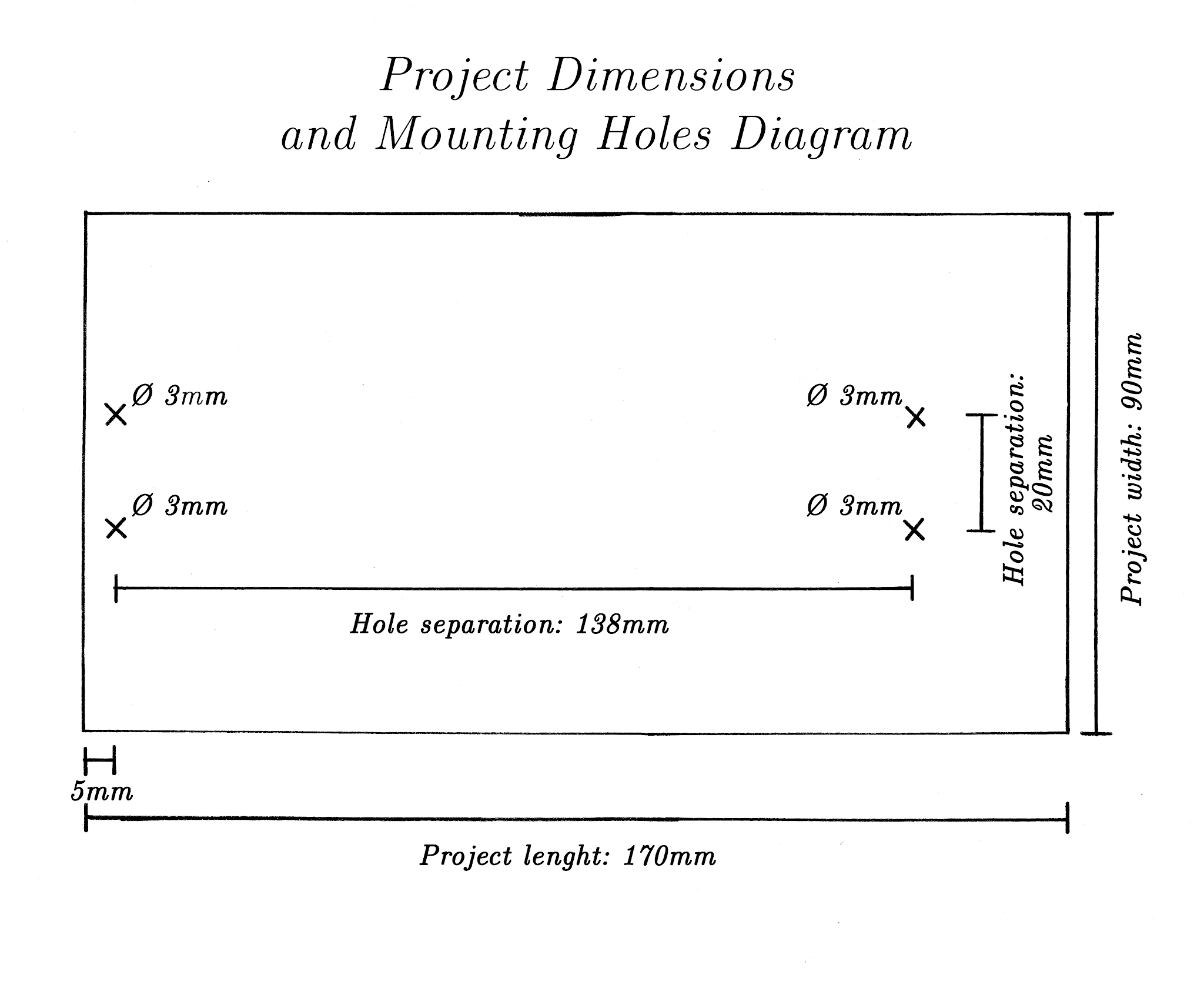 [Anglais]
Cosmic rays, particles coming from space, have always been a resource of energetic particles
for high energy physics experiments because the energy of cosmic rays can exceed energies
from particle accelerators. The study of cosmic rays can therefore give us precious insight into
the interaction between particles at high energies. The cosmic ray flux at the top of the earth
atmosphere is about 1000 particles per square meter per second. Those particles, called primary
cosmic rays, are ionized nuclei. About 79% of weight is protons, 15% is helium nucleons, and
the rest consists of heavier nuclei, such as oxygen, carbon, and iron. When those particles
hit the upper atmosphere, they produce a ”shower” of particles we observe on Earth such as
muons.
This experiment aims at investigating the different properties of those cosmic rays showers.
Firstly, we expect to observe an East/West effect in the distribution of cosmic rays. Indeed,
cosmic rays being charged particles, we know that the Lorentz force, defined as

will act on it according to the sign of the charge q because of the Earth magnetic field.
However, cosmic rays are mainly positively charged which means there should be more particles coming from one direction than the other. Moreover, when those particles progress through the atmosphere, they are slowed and disintegrate in the atmosphere in an exponential way (the disintegration law) so that as our experiment rises, it should detect more and more particles. Additionally, there should also be a difference in the number of particles detected according to the angle at which we receive them (the angular distribution) for the reason stated before : they have to go through a longer part of the atmosphere. We chose this topic, we thought it would be very interesting, because we don’t learn about it at school and because it links two of our big chapters in physics. Eventually, we hope that our experimental results can be used for other groups in the future for their own experiments.
1. The Experiment
We will mainly detect muons (muons are negatively charged particles which have a mass 207 times bigger than the one of the electron making them unstable : they quickly decay after being produced but still reach sea level thanks to their amazing speed) and gamma rays (Gamma rays, highly energetic photons (light), are one of the three main components of natural radiation
with beta particles (electrons and anti-electrons called positrons) and alpha particles (helium nuclei)) using a coincidence detector, which is composed of two Geiger tubes separated by a thin aluminium screen. A muon or a gamma ray passes through the first tube, then through the aluminium screen and finally through the second tube. Both tubes are placed in a rotating plane to measure the angular distribution of muons. When both tubes sense an event in an almost instantaneous moment, the Arduino
records a coincidence and correlates it with the angular measurements of the accelerometer and
the position of the rotating plane, the azimuthal angle of the magnetometer and the altitude
measurements of the pressure sensor.
1.1 Scientific Study
We originally planned on solely detecting muons and stopping the background radiation using
lead. However, if we look at the absorption rate for gamma rays which are the most penetrative
components of natural radiation, we have:
I(d) = I₀^(−μd)
Where I(d) and I₀ are respectively the intensities after and before passing through the lead,
μ = 0, 693147 is the absorption coefficient of lead, and d the thickness of the lead we should have used.
We can then find the thickness of the lead in order to stop a certain percentage of the gamma
radiation. We have taken here 90 percent:
d = (− ln (I(d)/I₀))/μ ≈ 3.3cm
Due to weight restrictions however, putting layers and layers of lead in order to minimise gamma
radiation from passing through the lead is not possible. Moreover, using lead in order to stop
the background radiation is not advised as Bremsstrahlung radiation (photons coming from the deceleration of charged particles) from beta particles will increase. We have thus decided to let gamma rays be detected by our the Geiger tubes and have decided to use aluminium instead of lead in order to stop beta and alpha radiation.
Additionally, gamma rays should have the same properties regarding the variation as a function
of altitude and as a function of angular distribution. The East/West effect will not be observed
because photons are not electrically charged but we are expecting that muons give us enough
data to demonstrate it.
1.2 Software
As explained before, when the Arduino detects a muon or a gamma ray, it records the various
physical readings recorded by the sensors. However, the way the Arduino works prevents the
software from checking the pin associated to the tubes only once in the loop: muons would only
be detected during the time the Arduino checks the pin of the Geiger tubes so lots of muons
would be lost. Inspired by tutorials, we thus put an attachInterrupt function in the software
which is called whenever the state of the pin of the Geiger tubes changes. Moreover, in order
not to overload the SD card and the Arduino with too much data, we coded the Arduino in
such a way that it only asks and records for data in the main loop whenever a muon is detected.
In this way, the Arduino basically performs two steps per cycle:
• The Geiger tubes in the rotating plane move by one degree.
• The Arduino checks if a muon is detected and if so retrieves the readings from the sensors
and writes them on the SD card.
1.3 Data Analysis
We’ll explain here how we will be processing data. The latter can be interpreted in three
different ways. The first one is the number of muons as a function of altitude, the second one is
the number of muons as a function of tilt angle and the last one is the variation of the muons
according to the azimuth (in order to verify the East/West effect). Our system will record in
this order: the muon number, the time of detection, the altitude, the temperature, the position
of the servo, the inclination readings from the magnetometer (x, y, z), the azimuth angle. As
you can see, each number is associated to a specific data:

Figure 1: Sample data.
1.3.1 Altitude
A constant velocity of elevation : If the velocity of elevation is constant, we’ll just take
the number of muons as a function of altitude. Each muon detected will be added to the
previous number of muons. This case is probably the best we can hope to have because the
data interpretation will be much easier than the second case. Indeed, the time between two
levels of height will be the same everywhere because of the constant velocity. The number of
muons per unit time will be proportional to one value of time. For exemple, between 100 meters
and 200 meters, we can detect 14 muons in 20 seconds. So, the value in this height would be
14 muons. Here, we don’t have to specify the quantity of muons per seconds because the value
of time that the gondola has spent between two same values of height will be equal.
A non-constant velocity of elevation : In the second case, the velocity is not constant
but accelerated. If we proceed like in the first exemple, we’ll have a problem. Indeed, the time
that the gondola has spent between two levels of height is important. For example, if the ballon
spend 20 seconds between 100 meters and 200 meters of height and detect 15 muons, the values
of the muons flux will be 3 muons per second. If 4 the gondola accelerates its movement, spend
18 seconds between 200 and 300 meters of height and detect 16 muons, the value of the muons
flux will be 8 muons per second. And so on and so forth. If we don’t do that, the numbers of
muons won’t be comparable. Indeed, in our example, it’s not only an increase in the quantity
of muons but also a decrease in time that the ballon has spent between the two levels of height.
So, there is a ”double increase” of the detection.
1.3.2 Tilt angle
The tilt corresponds to the position of the Servo motor but a problem we might encounter is a
tilt of the gondola that could distort falsify the mechanical value we record. We can solve this
problem by subtracting the inclination angle obtained from the magnetometer.
1.3.3 Azimuth
Azimuth represents the distribution East/West of muons. The only problem we might face
is the rotations of the gondola. The data from the arduino only reflects the azimuth of the
experiment. This involves that the rotations of the Geiger tubes and the tilts of the gondola
can influence the true direction of arrival of the muons. However, our system is equipped with
a compass and a tilt angle detector that can help us correct complications.
2 Electronic and Mechanical Design
The coincidence detector is essentially composed of two Geiger counter modules with STS-5
Geiger tubes and a control board rotating back and forth at 180 degrees with the help of an
SG90 servo motor.
The control board holds an Arduino microcontroller, an SD card module, a BMP280 pressure/temperature sensor and a transistor AND gate. One of the two support legs holds a QMC5883 magnetometer.
The two Geiger tubes form a plane that is used to determine the origin and the angular proportion of muons (and gamma rays).
When a muon passes through the two Geiger tubes, a coincidence is detected. The transistor
AND gate compares the output of the two modules, if both Geiger modules output a high
values in an ”instant” moment (due to the high speed of muons and gamma rays), the AND gate outputs a high value to the Arduino. The Arduino is then triggered and records the time, the position of the servo motor, the temperature and altitude calculated through the BMP280 pressure sensor and the azimuth measured by the magnetometer, onto the SD card.

(b)
Figure 2: The control board and the QMC5883 magnetometer with wire color code.

(a) The SG90 servo motor held between the two
Geiger modules.

(b) The rotation axle, allowing wires for power and
magnetometer to pass through.
Figure 4

(c)
Figure 5: Side views.
3 Testing
3.1 Physical properties
The final dimensions of the project are (L x l x H): 170mm x 90mm x 90mm.
The device weighs 169g with the optional aluminium screen (for optimal results), and 154g
without the aluminium screen.
3.2 Mechanical interface
The device is primarily a rotating plane supported by two legs. There are two fastening holes
separated by 20mm, of 3mm in diameter on each leg. The pairs of holes are separated by
138mm.

Figure 6: Project dimensions and fastening holes.
3.3 Electrical properties
The 5v battery connector cable is zip tied to the left leg of the device below the main on/off
switch.
The main status LED is located next to the Arduino, in the top right corner.
The device draws 80mA at 5v.
Figure 7: Location of the main on/off switch on the left leg and the status LED on the device.
3.4 Vacuum test
The device has been tested for a time period of 1 hour in a vacuum chamber at the ULB
Experimentarium.
Acknowledgements
We would like to thank Erik de Schrijver from the Asgard organisation in Sint-Pieters-Jette, Roeland van Malderen from the Royal Meteorological Institute and our physics teacher Mr. Albrecht-Marc, for allowing us to participate in this project (and therefore allowing us to bunk classes).
co-rédigé par/co-authored by: Aditya Chugh; Ahmed Zoglami, Carlo Schmitt, Georges Katicha.